Doug Dimmadome is a character that appears in some of the episodes of Fairly Oddparents series. His role in the episodes are always neutral, but sometime he is shown as villain. He lives in Dimmsdale and he is considered as most richest person in Dimmsdale. Doug Dimmadome has multiple business inside Dimmsdale. His main aim in his life is to earn money, a lot of money. He sometime help Timmy Turner. Doug can kill anyone who stops him from doing his business and earing money. Know more about Doug Dimmadome here.

Doug Dimmadome is a great costume idea for this Halloween. You can wear Fairly Oddparents costumes with your entire family, where one who is oldest in the family wears a Doug Dimmadome’s costume.

Doug Dimmadome wears cowboy like costume and same costume in every episodes. The only thing that changes in his costume is his 10 gallon hat which sometimes see as infinitely tall and sometime a normal hat. His costume includes, a tall hat, a white wig, a big mustache, white suit, a black-colored string tie, a white shirt, a white belt wit a lone star gold buckle, a golden ring, a pair of cowboy boots combined with spurs.

Get a white tall hat (taller is better) which is identical to what Doug wears in the Fairly Oddparents.

Doug is an old man, therefore get a old man’s wig and wear it below his 10 gallon hat.

Being an old man, Doug has big white mustache. Get this fake mustache which looks similar to Doug’s.

Get a white suit for this costume. Make sure the suit is a regular fit instead of slim fit. You can add gold accent to this suit similar to Doug’s costume.

Doug wear a big gold buckle attached to his white belt. The buckle has a lone star on. We have found this “The State of Texas” lone star buckle which looks similar to what Doug wears.

Doug also wears a gold color ring on his little finger. You can get this ring which fits your index finger. Check the size before buying.

Doug wear cowboy boots which is similar to this one.

Doug wears boot spurs even though he is not seen riding horse in any episodes. Get this cowboy boot spurs to complete this costume. 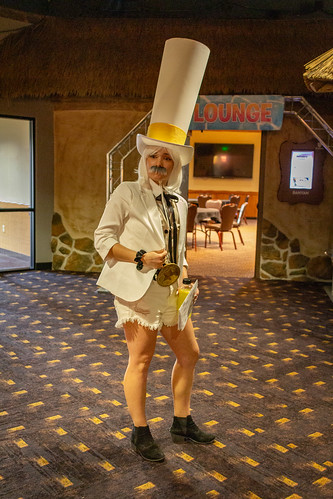